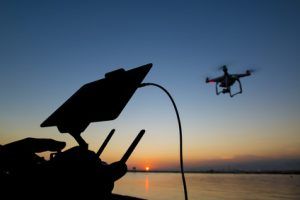 Civilian drones have been used for a bit of time now, but many of them have not been recognized as actual aircraft. This is due to the fact that they’ve not been as advanced as they currently are now. Due to this, many governing places are now considering them to be used in only specific areas, as well as being registered and having specific regulations on them that only allow the use of certain features.

As far as long term is considered, the use of drones might be able to take over many areas that people normally would have to do. This could be everything from farming to military use. However, when they’re used in a home setting, they can be used for other, illegal purposes, which makes the line between home use and illegal use very fine. Many people are not for the use of these little machines, while others might be all for them.

The good is that they can replace specific aspects that would once have been dangerous. The bad is that they can replace specific areas of normal living that would otherwise be bad for the economy. When it comes to civilian aircraft, they’re not able to be used for illegal purposes, but also cannot be used for commercial purposes.

If a farmer has a drone that they want to use to check on fields or livestock, they’re not able to use their private drone for a use such as this, since there has not been a patent or acceptance of the use of drones within this type of commercial sector. Specific grants, research and other areas have to be developed and accepted prior to the use of a drone in this specific sort of way.

The use of drones is currently being adopted in many other sectors, however, and currently are being used for at home use. However, being able to fly them in certain areas is restricted and should be considered prior to purchasing a drone for private use since they’re considered an actual aircraft.

As the lines become finer with every passing month that goes by with these drones, it is important to consider the outcome and the initial state of these small flying aircraft. Since they’re now becoming recognized as actual aircraft, it is becoming more and more strict with the laws that surround them, even if you want to use them for home use only.