Contraband Forfeiture to Save Abused Animals 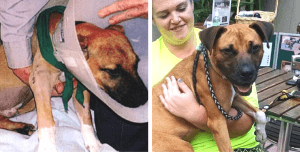 You love your pets, most likely just like another member of the family. You care for them, cuddle with them and enjoy their companionship. It’s hard to imagine that there are people out there who could do otherwise, that there are those who would cause harm to the animals that share their home. Fortunately, there are laws against animal cruelty that protect them from these treatments. People convicted of abuse could potentially face felony charges, and lose their pets. But if acquitted, the animal is likely to be returned to a potentially dangerous situation. Thanks to a Pennsylvania court ruling, there is now a way around putting animals back in harm’s way.

Back in 2014, a six month old puppy named Luke suffered from a broken shoulder. His owner was arrested, charged with cruelty and Luke was taken by the police. However, during the owner’s trial, a witness changed their story, which eventually led to the owner’s acquittal. The owner then demanded Luke to be returned. Concerned for Luke’s safety, the prosecutor went to work with the Animal Legal Defense Fund in an attempt to save him.

The prosecutor and the Animal Legal Defense Fund used the derivative contraband argument. They argued that Luke’s owner did not get the puppy the immediate medical care for his shoulder that he needed, rather than focusing on the injury itself, and therefore the owner had neglected him. In this argument, Luke became contraband, as the owner involved him in an unlawful act. The prosecutor stated that the owner committed an act of animal neglect (which is illegal), and that because Luke was the subject of this neglect he was directly involved. For this reason, they argued, Luke should be considered contraband and should therefore be forfeited.

In the outcome of Commonwealth vs. Kuhns, it was decided that Luke was indeed contraband, and the owner needed to forfeit him. The owner tried to appeal, but the Animal Legal Defense Fund came to Luke’s rescue yet again with an amicus brief. The brief stated that the contraband rules were correctly applied and that since the court views animals as property, the contraband status must be applied when the animal is subject to cruelty. Pennsylvania’s superior court upheld the decision, and Luke was saved from being returned to his owner.

This decision gives prosecutors, animal rights activists and law enforcement a whole new tool in their fight to protect animals. So long as the prosecution can prove that an animal has suffered neglect due to untimely care for their injuries, these animals can be saved from having to return to a dangerous environment. Because of this, abused animals can go on to a loving, safe home and enjoy a very happy life.