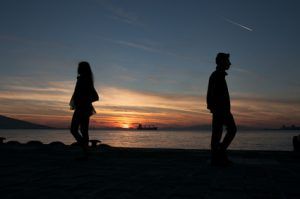 Have you ever witnessed a friend or family member go through the divorce process?  I bet you heard them say they were going to be civil going through the divorce.  And as the situation went through the courts, the civility went by the wayside.  Divorces are not typically civil.  They deal with the most emotional subject matter.  They deal with the loss of love, the living apart from children and the loss of money; three huge parts of someone’s life.  It’s no wonder the worst side of people often are seen at this time.

When filing for divorce, either an attorney is hired or the couple decided to file the paperwork on their own.  Each state has their own laws on divorce and people who are contemplating this should do their research.  Even if an attorney is retained, it is a good idea to know the basics.

When the papers are filed, there will be a court date set to determine temporary alimony and/or child support.  If the two people involved are civil enough to agree on these arrangements beforehand, the process goes much easier.  Many times the two people are in disagreement over everything, causing additional hearings and costing them more money.

During the time between the initial hearing and the final hearing, some states require the parents to attend parenting class.  This class is to help the parents realize the child should not be used against the other parent and also how to deal with the stress of the divorce.  Also during this time, financial papers need to be filed.  This shows debts and assets.  The couple will also make lists of belongings they each want out of the marriage.

When appearing before the judge without an agreement on finances, child custody and household items, the judge may order mediation.  This is where the couple and their attorneys meet together to iron out the details.  If minor children are part of the debate, the child may be assigned an attorney by the court to watch out for the child’s interest.

Having the break-up of your life put on display in a courtroom isn’t anything anyone wants to have happen.  Staying as civil as possible helps.  Also finding an attorney who sees the issues and helps solve the problems instead of fanning the fire is important.  It’s an emotional time that requires a calm demeanor.