I just read an article on the Wall Street Journal on line edition indicating that Judge Randall Rader, the Chief Judge for the United States Court of Appeals for the Federal Circuit has resigned his position as Chief this morning. All the stories I have read indicate that he is merely resigning as Chief, but will remain as a Judge on the Federal Circuit.  His resignation will be effective on May 30.  Judge Rader has rendered several rulings in patent cases that have shaped patent law as it currently stands.  Chief Judge Rader was appointed by President George H. W. Bush in 1990 and became the Chief Judge in 2010. 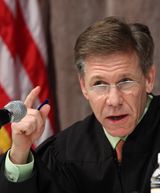 The Federal Circuit is made up of 18 judges.  What makes the Federal Circuit very interesting is that all appeals involving patent matters are heard there.  Unlike appeals for other cases that are heard in the geographical jurisdictions where the case at the district court level was heard, patent appeals are not geographically tied in nature.  Instead, the Federal Circuit is a “subject matter” court that was formed in order to eliminate conflicting laws on various cases depending on jurisdiction.  In other words, whereas the law in a copyright case may differ based on the particular jurisdiction where it is heard, patent appeals all come from one court and, as such, the law throughout the United States is uniform.

It appears that there may be some controversy with respect to Judge Rader’s resignation. Apparently, Judge Rader sent an attorney an endorsement and, coincidentally, that attorney has argued cases before the Federal Circuit.  This attorney had argued cases before Judge Rader including some of the Apple and Samsung cases.  Of course, the endorsement has raised questions among members of the patent bar.  It will be interesting to see who is selected as the next Chief.