Laws on last wills and testaments 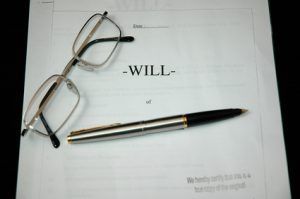 Many people think that it is not necessary to leave behind any last wills and testaments about their personal belongings for various reasons. This is a wrong choice as in such a scenario, the state will make one on its own, which may create a point of contention and a series of law suits between the remaining family members. It would be very useful, before making such decisions, to know what the state of Florida basic laws on the subject are:

Any person can dispose of his estate anyway they see fit, as long as some formalities are met. These are defined in the Florida Probate Code and basically the requirements are:

a)    that it is written (either by hand or typed)

d)    that the signature of the Testator is on the will

Further provisions of the law are:

a)    All the signatures on the will must be placed in the presence of both the witnesses and the Testator.

b)    The witnesses that co-sign a Will can be included in it as beneficiaries but it is better that they have no interest in the will.

c)    Another person may sign the Will if the Testator is unable to do so due to physical incapacity, as long as both the Testator and the witnesses are present. This person must not be a witness and it must be clear that the signature is placed at the direction of the Testator.

d)    Any changes, clarifications or amendments of a will after it was completed, are referred to as “codicils” and to be accepted by the state of Florida, must maintain the same formalities as the original will.

e)    It is allowed for an emancipated minor to make a will.

If someone dies without a will and the scenarios of:

a)    a surviving spouse but no children

b)    only children with the surviving spouse

a)    Holographic, i.e. handwritten without witnesses

b)    Nuncupative, i.e. verbally phrased in the presence of witnesses

As the heritage scenarios and the points of contention between an estate heirs can tie the estate in court for years, it is advisable to seek representation by experienced law firms such as Widerman and Malek’s that have the necessary knowledge and expertise on the subject.