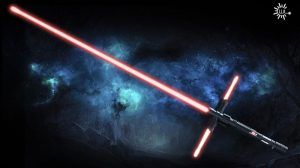 Star Wars has been popular for over three decades now, and with the latest movies coming out in the past few years, it’s no wonder that people are trying to cash in on them as much as possible. There’s still a strong following for the Star Wars movies, and there are a bunch of companies that have all sprung up around the idea of Star Wars. Many people are offering light saber lessons, or choreography lessons that are all based on the Star Wars world. This is something that LucasFilm is trying to put a stop to, and the company recently took action against many of the companies around the country.

One of the training facilities relies on a logo that’s really similar to the LucasFilm logo. In fact, it’s essentially the same six wing curved shape, it just has slightly different proportions to give it a different look, but when you put the two logos side by side, it’s clear that it’s just a copy. The key question that prosecutors considered was whether or not customers would be confused or would mix up the two logos, and the prosecutors decided that was highly likely due to their high level of similarity.

Cease and Desists Not Working

In response to the classes, LucasFilm sent out cease and desist letters to a large number of companies. That was to hopefully get them to change the theme of the company, or to stop doing business entirely. While a few companies did close down due to these letters or change up their style, many simply ignored the letter and went on about their business.

New York Jedi, even went on to apply for a patent for the company logo that depicts the Statue of Liberty holding a light saber and it says New York Jedi in circular letters. Not only is the request not likely to be successful, but it could actually make the company look more guilty of infringement. Asking for the patent after getting a cease and desist in the mail, simply shows that the company is willfully infringing upon LucasFilm.

The issue with all these companies that are coming out with products and services based on Star Wars is that the universe is owned by LucasFilm and it’s likely that many customers will mistake the offerings being made as a product from LucasFilm directly. The companies are taking advantage of someone else’s creation, and they aren’t’ paying royalties or any type of fee to the company to compensate it properly.