Since the U.S. Supreme Court decided Alice v. CLS Bank in 2014 there has been a drastic increase in 35 USC §101 rejections. The decision emphasized that inventions “directed to an abstract idea” are not patentable. The U.S. Patent Office has used this decision to reject a majority of software utility patent applications as well as a large number of U.S. software patents already issued before Alice was decided.

A strategy that has overcome this rejection involves framing the response in the form of a two-part analysis. The framework is structured from the decision itself as well as guidelines issued to USPTO examiners for addressing the issue. The two-part analysis is as follows:

Part 1: Clarify that the claims are not directed to a judicially recognized exception to patentability (law of nature, a natural phenomenon, a mathematical formula, or abstract idea);

Part 2: Even if directed to a judicially recognized exception to patentability, clarify that the invention’s claims amount to “significantly more” and constitute an “inventive concept” that “transform” the abstract idea into a patent-eligible application.

Yahoo patents that have successfully used this strategy:

35 USC §102 rejections are made when the U.S. Patent Office asserts that a previously issued patent, published patent application, or a non-patent printed publication anticipates each and every feature of the claimed invention. These rejections are based on a single prior art reference, which oftentimes makes them easier to overcome than other rejections.

Below is an example of a successful response overcoming a 35 USC §102 rejection: 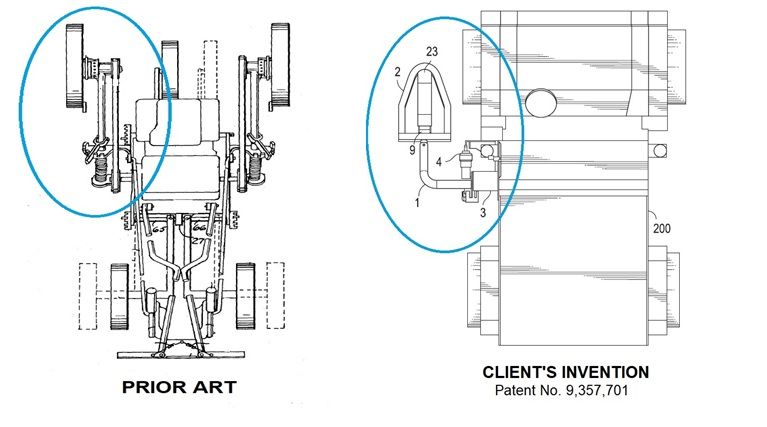 The prior art is missing the curved arm (#1 in the client’s figure) extending outward from the vehicle. It is also missing the frame assembly (#2 in the client’s figure). Once the distinction is recognized by comparing the figures, finding support in the specification strengthens the response. Amending the claims to clarify the distinctions overcomes the 35 USC §102 rejection.

35 USC §103 rejections are made when the U.S. Patent Office asserts that the invention is not fully described by any one prior art reference, but that a single reference or a combination of references can be modified to describe the applicant’s invention as claimed.

If a single reference is used under 35 USC §103, the examiner is asserting that a person having ordinary skill in the subject matter could use his or her common sense to arrive at the invention given the benefit of the single reference.

If multiple references are used under 35 USC §103, the examiner is asserting that a person of ordinary skill in the subject matter could combine the prior art teachings to arrive at the invention.

Another successful response strategy involves showing that the prior art used by the examiner is non-analogous. To be analogous, prior art must be:

1) from the same field of endeavor as the claimed invention; or

2) if not from the same field, reasonably pertinent to the particular problem faced by the inventor

For example, in a patent application regarding optimal flow patterns for a sewage treatment plant, a reference by the examiner describing a printer cartridge was non-analogous.

If you have questions or concerns related to protecting your invention, please contact us at (321) 255-2332.