Public Disclosure and its Effect on Patent Rights

For the inventor who is also a patent novice, there is a pitfall in telling others about your invention.  There are an unfortunate many who shoot themselves in the foot by disclosing their invention to others without taking necessary precautions to preserve their patent rights, and that disclosure can have negative consequences at home and abroad.  In order to save much grief, there are a number of things an inventor can and should do prior to telling anyone (except their friendly patent attorney, of course) about their invention.

First, we should talk about why public disclosures matter.  In the U.S., if an inventor should disclose their invention prior to filing a patent application on that invention, a one year clock begins to run, a result of the patent statute.  If the inventor does not file a patent application within that year, the inventor has lost out on his opportunity to acquire patent protection on his invention.  Moreover, if that inventor uses his invention in public, or makes the invention available for sale, the one year clock similarly runs.  Importantly, with the changes resulting from the America Invents Act, it is unclear whether an inventor using or offering for sale their invention will have the year within which to file an application.  The general consensus is don’t be the person to find out. 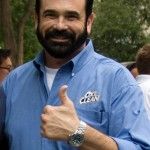 This guy made many disclosures

A fair question is “what constitutes a disclosure?”  This is a relevant question both presently and when the relevant sections of the AIA take effect, in this coming March.  A statement or depiction of the invention is a disclosure when it is sufficient to enable a person of skill in the art to make or use the invention.  Moreover, a disclosure is public, meaning available to a sufficiently large number of people (such as the attendees at a conference.)  An example is a photograph featured in a newspaper of an inventor standing beside his invention did not constitute a disclosure, as the necessary technical features were not discernible from the photograph nor the accompanying story, hence there was no disclosure.  Under the AIA, there is a one-year “grace period” within which a disclosure will not preclude the inventor from filing an application, but the same is not true for the Patent Cooperation Treaty (PCT), which states “everything made available to the public anywhere in the world by means of written disclosure (including drawings and other illustrations) shall be considered prior art provided that such making available occurred prior to the relevant date,” meaning the inventor cannot file a PCT application on his invention.  A hard-and-fast rule to be sure, one that has been befuddling to many.

Disclosures are particularly relevant in academia, where a scholarly article, while advancing the career of the author/inventor, may also have severely limiting effects on his patent rights.  Similarly, grant proposals, which are available to the public, are another opportunity to unwittingly make a disclosure, but procedures may be taken to prevent such disclosures from effecting patentability of the inventions contained within the proposal, such as identifying sections of the proposal that are considered confidential.

Ultimately, an inventor is well served by being cognizant of what he is revealing about his invention, to whom, and under what circumstances.  If he discusses his invention under the protection of a non-disclosure agreement, the inventor may rest easy that he is not making a statutory disclosure, as his words are sufficiently private.  Moreover, if an inventor withholds key elements of his invention, he will not provide a so-called enabling disclosure, therefore avoiding unpleasantries later down the road.  In any case, if an inventor may at some time desire patent protection, he should talk to an attorney before making any revealing disclosures about his invention.  Better safe than sorry.