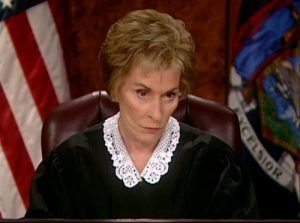 It is very surprising that many people still believe what they see on TV.  We can see doctors operating, police officers fighting crime and lawyers presenting those cases in court.  Law and Order is probably one of the most watched series of shows on TV.  It’s also interesting in that it starts with the crime and shows the process starting with the police investigation all the way through to the court outcome.

Many of the topics addressed by Law and Order or any other crime show have a factual basis.  I’m sure you’ve watched an episode or two and found yourself thinking it resembled a case from the news.  You were right, it does.  The show works closely with law enforcement to ensure accuracy.  These types of shows also work closely with the court system to make sure the depiction of that side of the law is accurate as well.  When the defense poses an objection, it is for a legitimate reason.  If evidence is found to have been gathered inappropriately, it is disallowed just like it would be in real life.

There are other law shows that give us a look inside a courtroom, The People’s Court or Judge Judy for example.  These are actually real judges on the TV.  They are dealing with real cases and render legal findings.  Granted the monetary value being sought is relatively minor, but the viewing public gets a very good idea what would be involved in a law suit.  Someone who is considering going to court for a civil matter is made more aware of what type of documentation they will need to succeed.

What is unrealistic about these law shows is the speed at which the cases are presented and ruled on.  The police and attorneys are miracle workers because the crime is discovered, solved and tried all in under an hour, and that includes commercials.  Now, we all know that doing all that in under an hour is ridiculous, but it has made the public’s expectations a bit unrealistic.  TV has created all kinds of expectations.  When Rescue 9-1-1 was on TV, all those dispatchers were able to assist callers with medical instructions prior to services arriving on the scene. Because of that TV show, the majority of 9-1-1 dispatchers in the United States are now trained to offer pre-arrival instructions.  Maybe those quick trials aren’t that far off.