Slip and Fall Claims Are Now Compensational Under Law 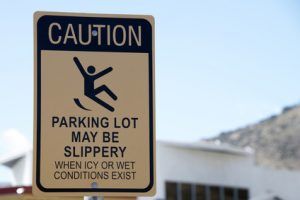 Before, Workers Comp wouldn’t have to cover accidents that might happen in the parking lot of the workplace. When someone slips and falls, it is just something that the person would have to deal with, or bring the company to court for a slip and fall claim – which they may or may not win.

This was a whole process and a lot of companies did not want to go through the trouble of having to worry about whether or not their employee would do this to them. This is something that the Court of Appeals had to decide on whether or not to make it coverable under Worker’s Comp, or to leave it at the discretion of the employee that has slipped and fallen.

While under the supervision of her working area, Annette Legarde-Bober slipped and fell on an icy patch of parking lot on her way to her vehicle on Oklahoma State University’s campus area. She was assigned a parking space in this area, but it was left unsalted, leaving the sidewalks around the premises icy and dangerous.

It was up for debate on whether or not it was her employer’s responsibility to cover the damages since she was clocked out for the day, but since she was on their premises and she has been working for them in their assigned space, it was ruled that they had to cover the damages. Of course, if they chose not to, she could also bring them to court for much more than just the damages that she suffered from the fall but also failure to comply with the Worker’s Comp claim.

The new law that they’re passing is to show that those that become injured on the work area, even if they’re clocked out, should still be covered under the Worker’s Comp benefits to ensure that they get the proper medical care.