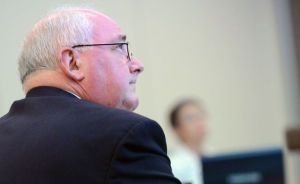 Former Monterey County Water Agency board director Steve Collins recently plead “no contest” to charges of “double-dipping” as a paid consultant by an outside agency while working for the Monterey County Water Agency. The project, a Regional Desalination Plant, was a failed project from the start. There was little funding compared to what was needed and support from “the right people” was non-existent. Furthermore, omitted evidence would have shown that Collins was used as a scapegoat to hide unethical business practices by others involved in the project. Collins realized quickly that the “good ‘ol boys” club is one that can be dangerous and dirty if one doesn’t play by the rules, and he was definitely invited to the gunfight with a very small knife.

By pleading “no contest,” Collins was given three years probation, as opposed to stiff fines and felony charges which would in turn never again allow him to hold office in the state of California. With his voice being unheard and his peers showing no type of support, only false disgrace, Collins in turn filed a $5M civil rights lawsuit against Monterey County and many of its main players.

The civil rights case focuses on the fact that Collins was told he could not bring forth any witnesses, who are now named in the civil rights case. He was not allowed to show evidence that would prove that his actions were honorable and that in no way were disputed by any of the council members or those on the advisory board. The truth of the matter is that he carried the weight, the dirty weight, of those in “the club” on his shoulders and no one was around to help.

In moving forward in the civil case, Collins will need to prove a “preponderance of the evidence,” utilizing documents, witnesses, and/or expert testimony, to show that each of these elements existed. In other words, he will need to prove that his evidence is more damning, if you will, than that of the opposing side. For Collins, this should be an easy feat, as he had prepared all necessary evidence for his criminal trial but was unable to present it.

When a jury evaluates the evidence, it examines the credibility of the witness(es), contradictions vs. consistencies in witness testimony and also with evidence provided by the opposing side, whether a witness has any interest in the outcome of the case and the quality of the evidence vs. the quantity.