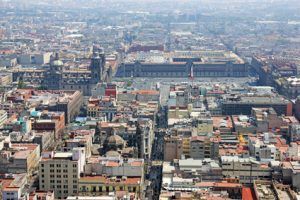 Mexico City has a really serious problem with air pollution. The smog levels are climbing to heights so great that the volcanoes in the background are no longer visible. The city is taking initiatives all the time to try and improve the issue, but there are still too many drivers out on the road today. Uber took it upon themselves to try and get a message across to residents of the smoggy city by using a series of drones.

Uber flew a series of drones over top of Mexico City back in July holding up a message that said “Driving alone?” and also “That’s why you never see the volcanoes now!”

The message is a clever advertisement for the Uber ride-sharing service that works to get multiple people together in the same vehicle. The region is known for its volcanoes and they are no longer visible because of all the smog in the area. It’s true that the volcanoes themselves have contributed to that air pollution, but driving is the main factor behind the polluted air.

Mexico City is working hard to limit this problem from all the constant driving, and has even put legislation in place that only allows driving on the roads 6 days a week. While that has helped alleviate the problem, it still persists throughout the capital city.

While Uber used the stunt to advertise its services months ago, it recently made headlines in the United States for its actions. The stunt shows that drones are multi-purpose devices that can be used all over the country by businesses. This is just one example of how drones can be used for advertising purposes, and it’s easy to see how drones could be holding up signs or flying them around town in the future to create mobile air advertisements.

The Advertising Had Little Impact

While the stunt was meant to drum up business for UberPOOL, most Mexican drivers never even saw it or heard about it. That’s because the drones weren’t out above the roadway nearly long enough. The signs were up very briefly and then they were gone.

As drones continue to gain popularity in the United States, Mexico and around the rest of the world, it’s interesting to see how people come up with new uses for the flying tools. They are becoming quite large in size, and taking on a whole new range of responsibilities.