Undue Influence: How do you Find Out? 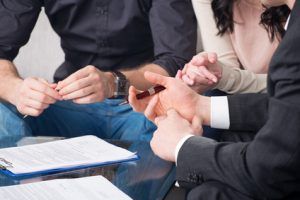 If you have ever heard a story that talks about someone that was shocked to learn of a loved one’s intentions in their will after they have passed, you might have been witness to undue influence. This nasty and hurtful process involves a less than well-meaning person using his influence over a supposed loved one to encourage him/her to change his will while not of sound mind. This could occur to an elderly or ill person that might not be thinking clearly and has no reason to think that the person suggesting the changes has any harm in mind.

The good news is that the law has these cases covered – if there is a question regarding the intentions of the will or that undue influence has occurred, proper evidence will need to be brought forth by the plaintiff as well as the defendant before the will can be executed. The probability of undue influence needs to be brought to the attention of the probate court in order for this to take place, though; they are not just going to examine every case – there needs to be sufficient reason to explore the case further.

What would be an example of a person trying to take advantage of a sick or frail person? Let’s take Marge for example. She suffered from several diseases, including dementia. She was easily confused and everyone knew it. One day her “long lost” cousin Mark decided he wanted to move in and take care of her because no one else was doing it, even though that was not true. It did not take long for Mark to convince Marge to write the rest of her family out of her life, including her own children because she was confused and not able to make decisions for herself. When it came time to read the will, suddenly Marge’s children were removed from the will and everything was split between Mark and his family.  When the case was brought to court, it was proven that Mark had in fact, not had any contact with Marge for the last 20 years and that Mark made it so that Marge’s own children could not see her in the weeks leading up to her death.

This is the perfect example of undue influence and how it can tear a family apart. While it is not easy to prove undue influence in court, mostly because the person that the will belongs to is no longer among us, it is possible to get justice. You will need proper witnesses to testify on behalf of the deceased and how he/she lived their lives, including their closest relationships as well as examples of how the will was misconstrued.

In the absence of the deceased being able to come back and talk to us – we have to rely on the proper witness to help us set the story straight and put an end to undue influence.