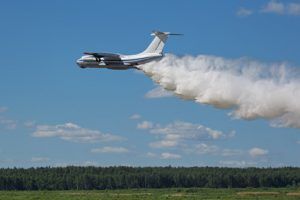 Utah has been dealing with trouble from unmanned aircraft systems interfering with the aircraft that fight wildfires throughout the state. Not only have these drones been confusing the aircraft trying to put out these dangerous fires, but some have even caused the systems to crash or to have to leave the area entirely. That’s a very serious problem that the state is dealing with using the release of some very specific laws pertaining to wildfire areas.

Misdemeanor or Felony
It’s possible to receive either a class B misdemeanor or felony charges for flying a drone too close to a wildfire zone. If your drone is too close to a wildfire you risk receiving a misdemeanor charge and likely a fine or even some mild time in jail for the act. If your drone causes the aircraft fighting the fire to drop a payload in the wrong location the charges are bumped up to a third degree felony. You’ll receive the same charge for crashing your drone into one of the aircraft fighting the fire, and a 2nd degree felony if the crash causes that aircraft to crash as well.

That’s exactly why you should stay well away from any wildfire locations with your drone, even if it is tempting to try and capture some footage of the scene for yourself. While it would be cool to create a video of a raging wildfire, it puts the experts in the area at risk, and your actions could cause more damage to occur to the area, that’s the last thing that most people would want to occur.

Keeping up on laws such as these will help keep drone users in Utah safe from the law, and it will help make fighting wildfires a bit less problematic as well. That means that everyone wins and it’s still possible to have a good time with drones outdoors. Just make sure that you keep on top of local Utah drone laws so you know what to expect when operating your device. The laws are going to continue changing as drones become increasingly popular and people figure out more ways to make use of the devices. That’s why it’s up to you to remain informed so that you know exactly how you should and shouldn’t be using your drone to have fun outdoors. As long as you do that you have nothing to worry about while using your device.