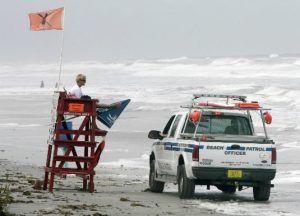 Rhode Island, known as the Ocean State, has a beautiful coastline on the Atlantic Ocean.  Its private and public beaches are enjoyed throughout the summer months by residents and tourists alike.  One day as a teenager I ventured forth with friends onto a private beach in Newport.  We were hoping not to be noticed if we stayed inconspicuously next to the stone wall divider.  Alas our plan failed within the first five minutes of arriving onto the private beach.  A security guard told us we were not allowed to be there and had to promptly leave.  We were about to leave the beach, when a neighboring beach sunbather told the security guard that we were perfectly within our rights to stay on the beach and did not have to move.  She explained that her father was on the board for beach zoning and knew that the public easement for the beach fell within the few feet we were lying in, next to the stone wall.  After briefly arguing with the security guard and his manager, this girl won our case.  We were allowed to stay.

Did you know that private beaches can still technically be accessed by way of public easements?  In sunny Florida, this also holds true.  Under Florida law, a public beach easement is evident when the use and enjoyment of the dry sand area landward of the mean high water mark is considered an ancient custom.  In order to prove public beach easement, the public needs to show that this public use of the land is ancient, reasonable and uninterrupted.

In this trial the public beach easement was for access to a public beach, but it could be argued for private beaches as well.  After all, people have frequented the coastline for hundreds of years.  The only tricky part would be proving access was uninterrupted.  If county gave over land to developers for private use, this could be considered an interruption.  However, if people argued the easement during the changing of hands from government land to private land, then they could potential win public beach easement rights.