A Whale of a Good Time!

Just a few days ago, a momma right whale and her young calf were seen off the shores of Melbourne Beach.  During the few days they will be passing through this area, many people will flock to Melbourne beach and surrounding areas in the hopes of not only catching sight of this beautiful whale, but perhaps even getting a picture.  This is a fun trip to take, but if you are one of the individuals on your way out to the beach with camera in hand, make sure to take note of the following: 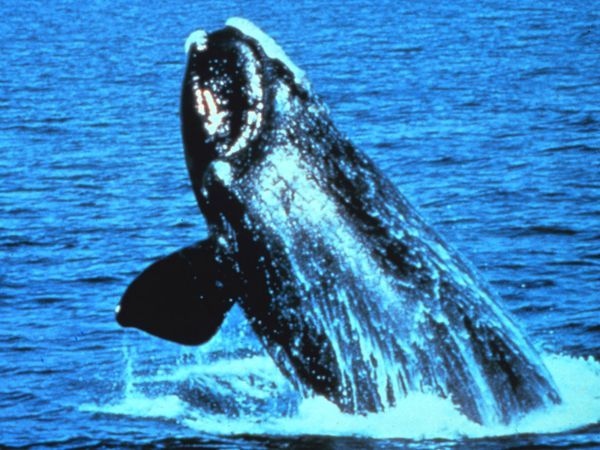 According to Federal law, individuals must stay at least 500 yards away from the whales. It doesn’t matter if you are in a boat, on a paddle-board, or even in a plane, the gap must be 500 yards.  A violation of this federal law could cost you up to $500,000 and a year in jail. The Florida Fish and Wildlife commission has stated they would prefer to educate people instead of imposing citations, but will bring criminal charges if needed.

The right whale population is only thought to number about 500 individuals.  They are currently a protected, endangered species.  Although they have historically lived to an average of 60 years, their lifespan has been drastically shortened due to being struck by boats, getting caught in fishing nets, and being targeted by hunters for their blubber.

In the winter, pregnant right whales swim from as far away as Canada to get to the warmer coastal waters off the Georgia and Florida coast.  Here they give birth and nurse their young.  In the early spring, they head back to their feeding areas which start in Maine and move northwards into Nova Scotia and Newfoundland.  As they migrate back north, they may be seen in one location for a few days because they are very slow swimmers.

In December, 2013, permanent speed zones have been enacted in order to help protect these endangered whales.  All vessels over 65 feet are required to slow down in areas where the right whales migrate.  Since the speed zones were temporarily enacted five years ago, there have been zero reported deaths of right whales due to ship strikes.

The Marine Resources Council runs the Northern Atlantic Right Whale Program. They currently have about 800 volunteers that look out for migrating right whales in order to help track and protect the momma and baby. It is thought that approximately 100 pregnant right whales make the trip south each year.  Each one is given a number and sometimes even given a name by the volunteers.

If you’re interested in seeing one of these rare right whales, keep your binoculars handy and hang out at the beach. Due to the limited number of these whales and their unpredictable movements, there are no whales watching excursions.  If you’re at the beach, look for dolphins, which often travel with the whales, and flocks of sea birds in the sky.  They’re most often spotted in February and March and sometimes are tracked on line.