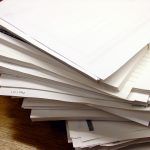 Most law students and attorneys seem to either have little or no problem with evidence or they absolutely hate it, most probably fall in the latter group.  If I have a document that I want to use as evidence, why can’t I?  Evidence rules often seem tedious and unnecessary, but nonetheless, they exist and using them effectively can lead to a winning case.  The Florida Evidence Code covers all the rules of evidence in Florida aside from the common law rules that haven’t been codified.  Of all the evidence rules, hearsay seems to be the most problematic.  Some statements seem like hearsay, but they aren’t and even if they are hearsay, there are a ton of exceptions, 30 to be exact. Section 90.801-90.806, Florida Statutes, covers the rules of Hearsay (and its exceptions).  One of those rules that clients and attorneys should be concerned with is the “Business Records Exception.”

Before we get to one of the exceptions though, let’s remind ourselves of what hearsay actually is. Section 90.801, Florida Statutes, gives the definition of hearsay as a statement or “nonverbal conduct of a person if it is intended as an assertion . . . other than one made by the declarant while testifying at trial or hearing,” offered to prove the truth of the matter asserted.  Basically, it’s typically he said/she said testimony.  For example, if a business owner wants to prove that a bill was paid and the business owner testifies that his accountant told him the bills were paid, this would be hearsay.  The rule is much broader than just verbal statements though, it includes all statements or assertions, such as gestures or documents.  So if you want to prove that the bills were paid, what can you do?

One option that may help you get around a hearsay objection is the “Business Records Exception.” Section 90.803(6), Florida Statutes fully defines the exception.  The exception requires that the record(s) be “made at or near the time” of the incidents and “kept in the course of a regularly conducted business activity” by “a person with knowledge.”  This exception means that the person creating the document does not necessarily have to be a party involved in a lawsuit.  A third party who just happened to be involved in an incident could produce some type of memorandum, report, record or data compilation.  If they do, the party in the lawsuit, i.e. the business owner, could enter the document(s) if he or she kept it in the regular course of their business.  So keeping records of documents even if produced by someone else, could be admissible if the business practice is to file or record those documents.  For instance, keeping expense lists and bills as a routine business practice would likely allow those expense lists and bills to be admissible (or at least avoid “death” by a hearsay objection).

Privileged information still cannot come in under ordinary circumstances, for instance notes that attorneys produce as work product for a particular client.  The “Business Records Exception” also does not prevent a judge from sustaining a hearsay objection if “the sources of information or other circumstances show lack of trustworthiness.” Section 90.803(6), Florida Statutes.  Allowing potentially untrustworthy evidence in would defeat the purpose of the exception, which was created because of the inherit trustworthiness of business records.  It should also be noted that records prepared in anticipation for litigation will not likely be admitted either.