Can You Save a Dog Locked in a Car? 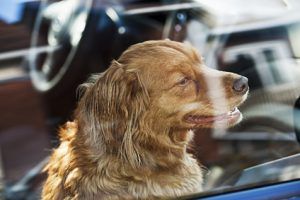 Imagine this: you’re out running errands one day. You park your car in the grocery store parking lot and start heading inside. It’s a bit warm out, but not terrible. All of the sudden, you hear some muffled barking. Following the sound, you see a dog sitting in a locked car. There’s no one with it, and there’s no one else around. The dog looks in obvious distress and you’re afraid for its safety. But what can you do about it?

In all fifty states, there are laws that protect animals from a whole myriad of abuse, neglect, and endangerment. Depending upon the charge, the resulting penalty can be anything from a citation to a felony. Even with this, only sixteen states have specific laws against leaving your pet locked alone in your car. And what’s more, it’s illegal in all of these states for you to attempt a rescue.

Back in 2015, a Georgia veteran found this out the hard way. Michael Hammons, with a group of others, happened upon a small dog locked inside a Mustang. Rather than wait for the officials to show up, Hammons decided to rescue the poor pup, fearing for its life. When the owner returned, rather than being grateful, she was rather upset, and Hammons was arrested for trespassing. The dog owner only received a citation. Georgia is one of the thirty-four states that doesn’t have specific laws regarding dogs locked in cars, but in some instances, such as this one, it can be viewed as animal cruelty.

While the charges against Hammons were eventually dropped, his case is a good example of what can happen if you try to take matters into your own hands.

Out of the sixteen states with laws against leaving your dog parked in a hot car, there are only fourteen of them that allow law enforcement. That means that in two states, no one, not even law enforcement, is allowed to break into a car to rescue a dog in danger.

So, What Can You Do?

Not everyone thinks about the consequences of leaving their beloved dog in the car, even if only for a short period of time. If you ever happen across a dog locked in a car, there are a few things you can do. First, do everything in your power to locate the owner. Get the license plate as well as the make and model of the car and go back into the store to alert customer service. They can make an announcement over the loudspeaker to alert the owner of the situation. You can also contact the local authorities and stay with the dog until help arrives. In the heat of the moment, some might decide to rescue the dog despite the laws, but those people are going to be facing some penalties for doing so. Just make every possible effort to help the dog without breaking into the car, and you could just be saving a it’s life.