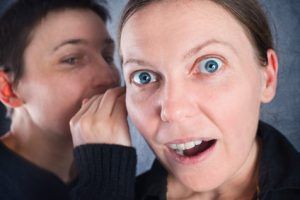 The most popular civil law cases that are widely known across the nation are defamation of character or slander cases. These happen when one or more people use an image or name from another party that soils an individual’s reputation. Celebrities commonly file civil lawsuits against the media or other causes of slander on their character. However, celebrities are not the only individuals that suffer from slander. Everyday people can also suffer from slander and file a claim against the person responsible for it.

There are two main types of civil lawsuits that can stem from a badgered reputation, slander and libel claims. Although they both are regarding a person’s harmed reputation, they are not both the same type of medium used to harm the reputation.

Slander occurs through word of mouth. When someone speaks out against another person’s character and in doing so harms their reputation, this is slander. The image of that person is damaged due to the words that the accused spoke. It could lead to serious consequences for the victim, including others to jump on board with the slander causing it to spread like a wildfire. Rumors can also be considered slander if they are from word of mouth to other people. Anything that is said regarding another person’s image, name, reputation, or actions can result in a slander lawsuit.

When a person decides to put hurtful things on social media pages, even though those pages are theirs, it is seen by thousands of people. If this person is a celebrity or famous the number of people that can see their posts or tweets may be seen by millions of people who have liked or followed that famous person. Libel occurs after a post, words, or a status is updated saying anything to harm a person’s character. It can be as simple as stating an opinion in the wrong manner. However, it might not be slander and said to mainstream media, but it is still viewed by thousands of people who may decide that what they are reading is true. This person, who is being harmed in the process of spreading these opinions or rumors, can sue the main cause of the libel person.

Under civil law, those who feel their reputation has been harmed due to the words of another individual, whether it is verbally or written, may file a civil lawsuit against the party responsible for the harm. Many of these cases that involve celebrities are kept off television, but will eventually show up in the weekly tabloids.