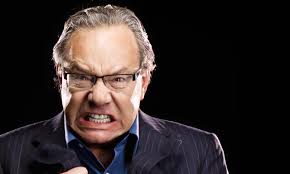 Originally from Maryland, Lewis Black’s road to fame didn’t always have him on the path to be a comedian. Black actually studied playwriting at the University of North Carolina Chapel Hill. He went on to work as a playwright in Hell’s Kitchen New York City and collaborated on hundreds of one act plays from 1981-1989. He would open the stage for his plays with a stand up act, getting the start to his now very successful career.

In an interview with the Denver Post, the Grammy-award winning comedian shared some of his secrets to success as he goes on this tour. He keeps his energy high by taking lots of naps and drinking lots of water. The 64 year old also now says that he keeps his alcohol to after the show and hasn’t smoked on stage in about 30 years. This all keeps his energy up, voice in tip-top loud form and, by getting out all his energy on stage, he tells the reporter that his blood pressure is in a very healthy range.

Black’s comedy is based in sarcastic humor and is not for the faint of heart (or for children). Inspired by comedy greats such as Richard Pryor and George Carlin, you can expect topics saturated in politics, hyperbole and profanity. His exaggerated and outlandish stand up routine has certainly gained him fame and a massive following. Lewis Black’s: The Rant is Due is hitting the Main Stage at Maxwell C. King Center for the Performing Arts (3865 N Wickham Rd, Melbourne, FL 32935) on February 14th at 8pm. Tickets are ranging from $39.50 – $59.50. For more information or to buy your tickets today, call (321)-242-2219, email