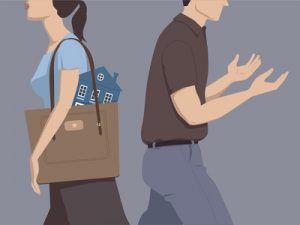 The definition of a common law marriage is a marriage by repute or habit.  Those who live their lives as a married couple without having registered the marriage legally exist in a common law marriage.  Both parties must acknowledge the marriage.  Both parties must be of an age that is of legal age to marry.  And both parties must not have a disability that would prevent them from being in a valid marriage.  These common law marriage types of living arrangements work out without issue until one partner wants to leave the relationship or passes away.  How does one determine what possessions belong to whom, when they have been acquired together and no legal standing has been determined.  If one partner worked to support the other through schooling, how is that partner compensated if the relationship ends?  When a death occurs in a common law marriage, there can be relatives that may have rights to assets over the live-in partner.

States have the right to determine if a living arrangement meets a common law status and whether it will legally recognize it.  Currently nine states definitely recognize common law marriage.  Those states are; Utah, Texas, South Carolina, Rhode Island, Montana, Kansas, Iowa, Colorado and Alabama.  The District of Columbia recognizes them as well.  Florida will recognize only those common law marriages that were in existence prior to 1968, when those unions were no longer allowed to be considered legal.  No new unions could be entered into after 1968.  Your common law marriage will also be recognized in Florida if you were in a state where it was legal and moved to Florida.

While many feel there is no need to enter into a legal marriage or live in a state where common law marriages are legal, there are benefits.  A legal spouse is entitled to make medical decisions for the other is required.  Hospital visitation may even be affected if not legally married.  Inheriting the other’s property is another benefit of a legal marriage.  Being legally married will also benefit spouses if a divorce occurs.