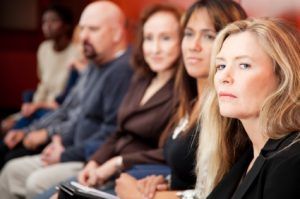 Who can forget the murder trial of OJ Simpson?  Back in 1995, OJ Simpson went to trial for the murder of his ex-wife Nicole Brown Simpson and Ronald Goldman.  The criminal trial captivated the attention of the American public and the world over.  In the end of the long nine month trial, OJ Simpson was found “not guilty” after five hours of deliberation.  The verdict caused a huge outcry as the evidence found against him was very strong.  How could he be found not guilty by the jury?

The problem was that in a criminal lawsuit, the defendant is innocent until proven guilty.  The jury could not issue a verdict of guilty unless the jury unanimously found the defendant “beyond a reasonable doubt” guilty.  In the case with OJ Simpson’s trial, the jury had reason to doubt the evidence because of the discovery of the police tampering with the evidence.

After Simpson was found “not guilty” in the criminal lawsuit, the families of Ronald Goldman and Nicole Brown Simpson filed a civil lawsuit against him.  Simpson was forced to testify during this trial and the evidence stacked against him was enough to prove him guilty.  In the civil lawsuit, the second jury found him guilty and awarded the families compensation for their losses.

In the criminal suit, if Simpson were found guilt he would have been punished with jail time and been fined by the government.  However, the civil law does not issue jail time.  They punish the losing defendant in the form of compensation to be awarded to the plaintiff   Since Simpson lost his civil trial, he was ruled to pay the grieving families of Nicole Brown Simpson and Ronald Goldman.