Do the Non-Smoking Laws Apply to Legalized Marijuana? 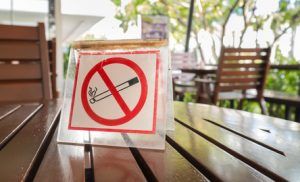 Since the legalization of marijuana, many landlords are finding it hard to find a clear delineation on whether or not they can let their tenants know that their buildings and apartments are smoke free zones, including marijuana. However, many of the rules and laws regarding the renting of properties have not been changed to include this now legal substance and only covers cigarette and cigar smoking. This is the fine line that many landlords are trying to walk and find out what they’re legally able to do or not do.

Since the laws are not specific on the smoking of marijuana, many argue that it includes all types of smoking within the areas. It should not matter what it is that you’re lighting up and going to smoke, Cloves for instance, are a type of cigarette but not necessarily a cigarette. However, the people smoking them are not able to do so in these smoke free zones throughout numerous public places.

Would the same go for smoking marijuana in these areas?

Many landlords are wondering since they can stop their tenants from smoking cigarettes within the facilities, should they add that marijuana smoking is also something that is not permitted on the grounds? Smoking in general could cost a lot to repair and fix within these dwellings, which is why they’ve made the change or just to rid the pollution of the smoking from the buildings.

Many companies are now making all of their grounds completely free of smoking and not just the inside of the apartments. They’re looking to remove the smoking from the outside of the buildings, the balconies and other areas where people gather to smoke.

For the states that are legalizing marijuana, the fine line still exists and it will until the smoking laws have been redefined to add or remove these specific smoking properties from them. The landlords can technically not fine or take the tenant to court if it was found that they smoked marijuana within the property since the no smoking rules have yet to be defined. This could cost many landlords a lot of money to get the apartments ready for someone else.

Additionally, this is going to make the no-smoking bans moot since it does not cover all types of smoking within these public areas, just cigarettes that people smoke within them and nothing against smoking marijuana in the areas.