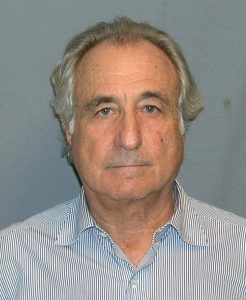 Bernie Madoff and Martha Stewart; on the face of it these two would seem to have little in common.  Bernie Madoff was an investment advisor and financier. He founded Bernard L Madoff Investment Securities, a Wall Street firm. Martha Stewart is known for her décor, recipes and homemaking skills. She is envied by women everywhere for seemingly being able to do it all. They do, however, have one thing in common. Both were convicted on violations regarding investments and insider trading.

Martha Stewart was convicted on charges dealing with the ImClone trading scandal. The U.S. Securities and Exchange Commission alleged that Stewart sold all 3,928 shares of the ImClone stock she held to avoid a loss of $45,673. These stocks were sold only after receiving confidential material and information from Peter Bacanovic, her broker. One day after the sale of her stock, ImClone stock prices fell 16%. Stewart was tried and found guilty. She served from October 2004 to March 2005 in federal prison.

Bernie Madoff is probably one of the most hated names in the world of finance. He orchestrated one of the largest financial fraud operations seen in U.S. history. His massive Ponzi scheme caused thousands of investors to lose billions of dollars. It is estimated that he began the fraud as early as 1980. His downfall started in 2008 that Madoff confided to his son that he was having difficulty in paying $7 million in redemptions. He was arrested in December 2008 on securities fraud. Madoff was found guilty and sentenced to 150 years in prison.

These two cases are by far not the only ones seen in recent times, they are only two of the most famous.  Many more people in the financial world tempted to violate securities and trade law to make a profit.  As recently as 2013 HSBC was hit with a $2.46 billion settlement on a class action suit filed in Chicago.  HSBC was a mortgage lender. Another case is a pennystock fraud case worth $140 million dollars.  Seven individuals are accused of participating in this fraud case. The worthless stocks were sold to people in as many as 35 countries. There are said to be two Canadian suspects still at large.

Financial scams and frauds have been around for decades. Whenever there is questionable activity by your financial advisor, seek legal counsel; an attorney experienced in business law may prevent you from becoming one of these fraud statistics.