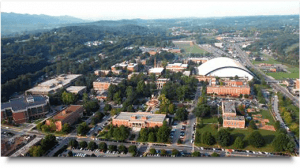 A group of college students joined in protest September 27th by East Tennessee State University to show support for the black lives matter movement. Shortly after protesting began, an unpredictable disturbance made itself known in the form of a college boy wielding a stuffed banana. The young man was wearing a furry gorilla mask, a confederate flag backpack and waving a yellow plush banana at protesters. The freshman, identified as Tristan Rettke is majoring in public safety and had one goal in mind.

The protest was being held to honor the victims of shootings that occurred over the last few months. Three unarmed black men have been shot in as many months, and students are fed up and angered. Grant Madison was talking with a friend and was one of the first to interact with Retke. Madison says that the college freshman handed him a banana. Grant told reporters: “I snatched it out of his hand. I knew what he was trying to say, but I wasn’t going to try to retaliate against him.” Mr. Madison recorded and livestreamed the strange occurrence on Facebook. Tristan Retke reportedly antagonized and teased protesters for almost 20 minutes.

Authorities at the college have expressed their sadness and confusion as to why one of their students would act in such a manner. “We are exceptionally proud of the students who were peacefully participating in the event and the manner in which they exercised restraint, thoughtfulness and strength in the face of inappropriate and offensive behavior,” Noland said in a statement. Rettke was immediately suspended from the school and is facing a thorough internal investigation.

Rettke wore a gorilla mask and also carried a rope because he wanted to intimidate those supporting the black lives matter movement. It’s not permitted to dress in costume that insults or belittles another human being. This is an illegal manner of expression and was not taken lightly by the crowd or authorities. Public officers eventually escorted Rettke from the event and he has been charged with civil rights intimidation. This charge is equivalent to a class D felony or misdemeanor. Though Grant Madison was initially disturbed by the banana toting teen, he now looks back on it in a new light. He says that they’ve become friends on Facebook and he wants to understand what Tristan was hoping to accomplish.