Google Patent Making Sure You Stick Around After Accident, Literally 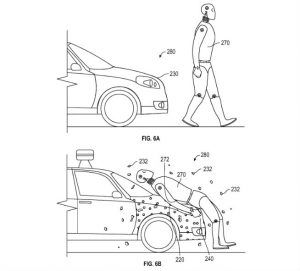 A new patent, which Google received on Tuesday, will have pedestrians sticking to your car hood like flies on flypaper.  The purpose of this design is not to prevent the classic “hit and run” scenario, however. It is actually designed to prevent further injury to the pedestrian that was struck. The design is being considered for use on Google’s new automated vehicle designs.

“The adhesive layer may be a very sticky material and operate in a manner similar to flypaper, or double-sided duct tape,” the patent said.

You would actually be stuck to the car to prevent further injury that would occur when the vehicle stops and otherwise would propel you forward. This is where you may hit other objects or worsen an injury sustained from the initial contact.

This patent is just one in a long line of existing (or patent pending) designs created to lessen injuries sustained during an auto accident. Remember the movie “Demolition Man”? Whenever a car crashed in that movie the interior of vehicle instantly filled with a spray foam that created a cushion around the occupants. I’m personally still looking forward to that one.

Just because the patent has been granted does not mean that the idea will ever be used. Large companies with large product lines have countless patents of which only a fraction are ever actually utilized.

The Google patent comes at a time when we are seeing a dramatic rise in pedestrian traffic related accidents and injuries. There was a 10% increase from 2013 -2014 alone. The main reasons for this dramatic increase are distracted driving and increasing population densities.