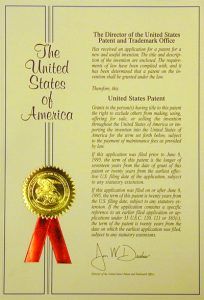 Patents are paper documents and records that grant ownership of an idea to a person. In other words, if you come up with a brilliant idea, such as a gasoline powered engine, you can create a patent, or a detailed description of your invention, and then file a patent surrounding it. The patent is held at a major government location and protected carefully. It shows that you came up with the idea and when you submitted it for protection.

There are Many Requirements
In order to qualify for a patent, the idea can’t be widely discussed and known about for too long, and it has to be a major change from everything else that’s already been patented. For instance, you can take two already patented items, such as a watch and a telescope, and combine them in such a way to create a new product entirely that gives some added functionality or another that wasn’t available before the creation. This could be patented as long as the idea wasn’t already out there published in journals or being discussed widely for too long. Even your own personal ideas can’t be patented by you if they have been out in the public for a year or longer.

Patents are Usually Improvements on Another Invention
Patents are most often just improvements to another existing invention. Think going from the black and white television set to a color one, or a flip phone for a modern-day smartphone. By improving a technology enough something new is created and that new creation can then be patented by the creator without permission from the first person at all.

It Must Work
The patent that you put in must be for a working machine that will do what you say it does. For instance, you couldn’t patent an airplane unless it flew around. You couldn’t patent a fan if the blades didn’t actually spin when it was put together. Your creation must actually work, and it’s helpful if you can prove that it does at the time of your patent.

There is a Time Limit
It’s important to note that every patent comes with a time limit. In other words, you can profit from your creations, but eventually the creations are up for grabs by everyone else. This is to help people from creating a monopoly over creations for too long, and it is aimed at encouraging innovation and future technological developments as well.

Patents are good for a total of 20 years after they are given out in the United States. That means you have a total of 20 years to profit from your creation before anyone can do what they want with your idea. You can sell that patent to another company during that time period, or make a product that you sell to people based off the idea. No matter what you do with it, the idea is yours for 20 years unless you transfer it to someone else or decide to make it freely available for everyone.