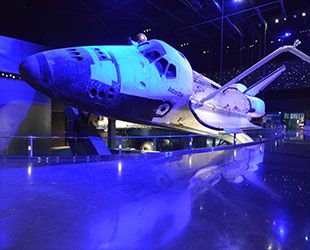 The Kennedy Space Station is opening their new Space Shuttle Atlantis Exhibit on June 29th to the general public.  Visitors of the Space Station are in for an out this world experience!  Greeting them upon entering the exhibit is the 150,000 pound Space Shuttle Atlantis hanging suspended 30 feet off the ground and tilted at a 43 degree angle.  Developers working on the exhibit wanted visitors to experience the spaceship from the perspective of an astronaut seeing it orbiting in its natural environment

The Space Shuttle Atlantis played an important part in the United State’s 30 year space exploration.  Atlantis was the last shuttle launched out of the Shuttle Program.  The Shuttle launched for its final mission on July 8, 2011 from Kennedy Space Station to deliver supplies to the International Space Station. Atlantis while in space orbited the Earth 4,848 times!

The spacecraft’s new 90,000 square foot home features 60 interactive exhibits and high tech simulators to engage its visitors.  It also features educational films and displays explaining the space programs past, including the lost of two space shuttles and 14 astronauts. Bill Moore, Chief Operating Officer of the Visitors Center for NASA at Cape Canaveral explains “You have to talk about all five shuttles, you can’t talk about just three.  We don’t hide behind those facts.”

The $100 million project aims to educate the public on the level of magnitude it takes to launch a shuttle into space – from the engineering of the Space Shuttle to withstand space conditions to the thousands of scientists involved behind the scenes to make a mission successful.  The Kennedy Space Station hopes the exhibit will reignite the public’s interest in space exploration.   Especially now since NASA needs to raise $100 billion to send astronauts beyond the International Space Station.  Tickets for the exhibit are $50 for adults and $40 for children.