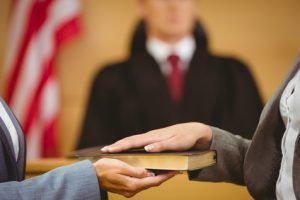 Many people wonder why it is necessary to be represented by a lawyer when they have a dispute to settle. Maybe it would be best if they knew what is involved, when a case goes to court.

Whenever an entity (person, organization, company, etc…) had a complaint against another entity, the old way of settling the dispute was to grab a couple of swords or pistols and fight it out. Civilization stopped this practice and created the courts of law for the purpose of deciding who is right and who is wrong in a dispute. For a court of law to intervene, there must be a complaint filed in the form of a lawsuit.

Litigation is the process by which the lawsuit is handled from the time it is filed until the time a decision is taken by the court and the problem has been resolved. The plaintiff and the defendant are called litigants and the representing lawyers, litigators.

For a court to intervene in a dispute the first thing is a summons. This is the paperwork with which the plaintiff lets the defendant know that they have a complaint against them and they need resolution. In some jurisdictions it is not even allowed to file a lawsuit if the summons is not served first.

The next stage is the discovery during which both parties exchange evidence of their allegations and statements. Its purpose is to eliminate surprises and make the litigants understand that they should either settle or drop any claims that are of frivolous nature. Discovery ends with a selection of a jury trial or a bench trial.

When the case reaches a judge or a jury, both parties are required to present their witnesses and enter their evidence into the record. Here is where the presumption of innocence doctrine is upheld. The plaintiff is required to prove his claims beyond any reasonable doubt. If he does, then the defendant must have a trial strategy in place with which to defend against the plaintiff.

This is also the stage that any motions for premature termination or summary judgment are entered.

In the end the judge or the jury makes the decision. Then the litigant that lost the case may file an appeal.

Still think you can do it on your own and that no lawyer is needed? Perhaps you should reconsider and seek the services of Widerman and Malek who go through litigation for a living and know what they are doing.