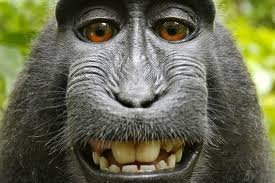 In a recent event, British photojournalist David Slater, has accused Wikipedia of copyright infringement when the organization allegedly refused to take down a photo taken by a monkey using the camera belonging to Slater. The picture in question is a selfie taken by a black Macaca Nigra monkey, who during a photo shoot in Indonesia in 2011 swiped the camera from Slater and took numerous pictures, including the selfie during a photo shoot in Indonesia. The picture has been made available as a free image under Wikimedia Commons and Slater is saying that it is costing him royalties. He argued that “they’ve (Wikimedia) got no right to say that it’s public domain. A monkey pressed the button, but I did all the setting up,”

When contacted Wikimedia remarked “We received a takedown request from the photographer, claiming that he owned the copyright to the photographs. We didn’t agree. So we denied the request,” and “to claim copyright, the photographer would have had to make substantial contributions to the final image, and even then, they’d only have copyright for those alterations, not the underlying image. This means that there was no one on whom to bestow copyright, so the image falls into the public domain.”

After the picture went viral in 2011 Slater told The Telegraph “He must have taken hundreds of pictures by the time I got my camera back, but not very many were in focus. He obviously hadn’t worked that out yet.”

And now the copyright regulators of the US are in complete agreement with Wikimedia. In a twelve hundred and twenty two page report detailing the federal law regarding copyright, issued two weeks after the accusation, by The US Copyright Office it is mentioned that “photograph taken by a monkey” is not an intellectual property.

“The Office will not register works produced by nature, animals, or plants. Likewise, the Office cannot register a work purportedly created by divine or supernatural beings, although the Office may register a work where the application or the deposit copy state that the work was inspired by a divine spirit,” – said the report (Compendium of US Copyright Office Practices, Third Edition). In the UK, however, the photo journalist has every chance of getting a copyright on the said pictures if he can prove that the photos are a part of his intellectual creation. The Telegraph summed up the bizarre issue by saying that “such a case has never been tried in court.”