Remember This? When Common Sense Loses in a Court of Law 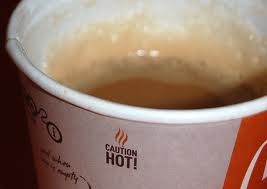 Are you aware that coffee is served hot? How about that if hot coffee were to accidentally spill on someone it could burn that person?  If you knew both these facts, congratulations you have mastered common sense.  Common sense tells us that hot beverages are going to hurt if poured onto our skin.  Anyone who has ever stepped prematurely under scalding water in the shower can attest that hot liquid, no matter the liquid, will hurt upon contact with the skin.  Why then does McDonald’s and other eateries that serve coffee insult our intelligence by placing warning messages on their coffee cups that states the obvious, that coffee is hot?

The reason is that in 1992, McDonald’s lost a lawsuit against a 79 year old Albuquerque woman named Stella Liebeck, who sued McDonald’s after spilling coffee onto her lap.  Even though she admits to pouring the hot liquid onto her own lap, she claimed McDonald’s was responsible for her injury because they made the coffee too hot and did not warn her.

Stella Liebeck is the woman responsible for all beverage cups having the disclaimer that coffee is very hot.  She successfully won her lawsuit and received a whopping $2.7 million in punitive damages along with an additional $160,000 in compensatory damages.  What does this lawsuit teach us?  That common sense can take a back seat to book smarts.  Clearly Ms. Liebeck or her lawyer had enough book smarts to arguably win in a court of law against good old fashion common sense.

When else has common sense lost in a civil court trial?

Blitz U.S.A, the once leading provider of gas canisters in the United States, became the victim of several lawsuits in the early 2000’s.  Several plaintiffs sued the company after hurting themselves as a direct result of throwing gas onto a lit fire.  Hmm…how many of you are surprised to learn that gas is highly combustible and when mixed with fire can explode?  Again this should be common knowledge as it is taught in science class in all school systems.  Yet, once again common sense loses and the plaintiffs win their lawsuits against Blitz U.S.A.  The lawsuits cause Blitz U.S.A to go out of business and lay off over 100 employees.  Worst still is the timing of Blitz’s closing.  Blitz closes right before Hurricane Sandy hits, leaving thousands without a way to transport gasoline during a time when most needed. Talk about an epic fail.  The courts’ rulings cost a reputable company everything, Americans to lose their jobs and many more Americans to be stranded after a natural disaster.

Common sense is a fine thing for one to self possess.  Common sense leads to good decision making and serves many well throughout their lives.  Unfortunately as demonstrated here, common sense does not win in a court of law.  Sometimes clever attorneys can successfully plead their plaintiff’s case and trump what we take to be common knowledge.