Same Sex Marriage Couple’s Divorce Could Get Sticky in Florida 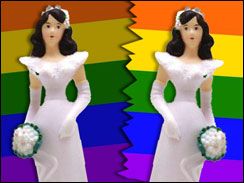 Massachusetts recognizes the legal marriage in same-sex couples. Florida does not. So what happens when a same sex couple is married in Massachusetts, moves to Florida, then decides they want to divorce? That is a real issue with a couple who filed for divorce in Hillsborough County earlier this month.

A woman who married her partner four years ago in Massachusetts was told in order to divorce her partner in Massachusetts they would have had to live in the state for one year. So can they get divorced in Florida? No. Florida does not recognize same sex marriages, so how can you get a divorce if the state says you are not legally married? Does one need a divorce if they were not married in the first place?

How this case is solved can throw the same-sex marriage laws in Florida as well as the other 33 states that do not recognize these unions into chaos.

Would Florida allowing a no-contest divorce to happen be such a bad thing? On the surface, no. But if they recognize the divorce, does that mean they have also recognized the marriage? If so, then would they have to recognize all same sex marriages and then therefore be forced to allow same sex couples to wed in Florida?

However, does not allowing the couple to divorce, then are they not forcing the couple to stay married, also acknowledging the marriage and perhaps giving their stamp of approval on it? How can Florida find a way out of this while keeping their ban on same sex marriage in tact?

Can there be a law that allows a state to recognize same sex marriages from other states while not allowing the practice in their state? Perhaps states that recognize these unions can allow people from state that do not to get married and divorced in their states without requiring them to reside there. That would seem to be an equitable solution to a serious problem.