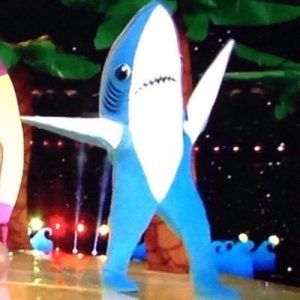 Can you trademark a costume containing an uncoordinated dancer? This is a question that has been in the news recently thanks to Katy Perry. The performer attempted to file a registration request to trademark the image of a rather uncoordinated shark. Her legal team went so far as to file claims of copyright violations against anyone who attempted to produce their own content using the beast’s image. Confused yet?

What is a Left Shark?

Perry performed as part of the halftime show during the 2015 Super Bowl. She was joined onstage for a short time by two dancers wearing shark costumes. One of them managed to muddle their way through the performance despite the unwieldy outfit, but the other dancer, located to the crowd’s left, had a little bit more difficulty. They were a bit behind the music and presented a rather amusing image of a giant shark bobbing and weaving, seemingly at random and the crowd, both in the stadium and online, fell in love. Although a number of names popped up, including Drunk Shark, the uncoordinated shark was ultimately dubbed Left Shark. Video clips, memes, and .gifs of the shark flooded the internet soon after its appearance, complete with imitations and image macros.

Can I Trademark a Shark Costume?

Although the popularity of Left Shark waned fairly quickly, there were a few particularly entrepreneurial individuals who attempted to produce content targeted at impulse buyers before its popularity ran out. Perry’s legal team was not amused, and quickly served copyright violation claims against the sellers in question. They also submitted a trademark registration request in an attempt to ensure that the shark could only be utilized – and, presumably, monetized – by Perry. A video of the performance was submitted alongside the request in an attempt to strengthen the case and illustrate the shark’s unique characteristics.

In a rather hilarious turn of events, however, it turns out that the design used by Perry’s team in the trademark request is not the same shark that was used in her performance. There are a number of differing physical attributes, including the number of fills, fins, teeth, and eye shape. The request to trademark the design was denied, however the request to trademark the phrase “Left Shark” is still under consideration. As of this writing, there is no indication of new legal developments, however it is likely that Left Shark will make a few more appearances in the news before the issue is completely settled.