What a Concussion can do for a Criminal Defendant 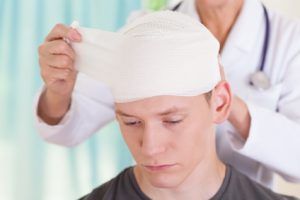 We’ve all known that playing sports can come with its own set of risks. We’ve seen it on television and we’ve seen it while watching our children play various sports throughout their childhood. And now, the media has the ability to show instant replays over and over again, as we watch a great athlete tear a tendon and end his professional career. The one thing, however, that never seemed to move us much were the constant blows to head. Whether it was a boxer being pounded by his opponent, a basketball player dribbling for a layup and falling to the ground head first or the football player at the bottom of the pile after a play, the head has surely had its fair share of battle wounds on athletes for many years.

Like anything else, sports medicine is continuing to advance in its ability to heal the broken and worn bones, sew tendons back together, and now begin studies on the effects of concussions on the brain. Although the head may seem to have weathered the storm after a hard hit, inside that tough skull is a brain that has definitely seen some damage in being bounced around season after season.

As medical science has continued to explore the long-term effects of concussions, criminal defendants have begun to utilize these studies in their own trials. Recently, Jordan Clemons, a former high school football player, used a sport-related brain injury as a causative factor for his illegal behavior. His lawyer stated that his client has suffered extensive brain injuries, including multiple concussive and sub-concussive blows from football, and asked that a neurologist and psychologist evaluate his client. If the brain injuries proved to be substantive and demonstrated an inability to function properly, his lawyer would be able to prove “diminished capacity,” meaning his client would not meet the legal requirements for first-degree murder charges, thus lessening the charges and punishment. And by the way, his client was charged with brutally murdering his girlfriend.

Although there have been cases in the past in which attorneys sought to use the “traumatic brain injury” approach, few judges would allow this evidence into trial. However, with new studies, there have been several cases that have been reversed due to the trial court violating the defendant’s due process rights and failure-to-investigate the claim.

This new ethic breathes life into the word “competency,” and a lawyer clearly has an ethical obligation to investigate his or her client’s brain-injury history in order to pursue all potential defenses.