Where is the Air Show? 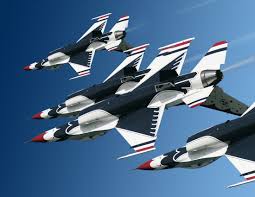 It may be more than seven months away, but the organizers for the Melbourne Air and Space Show are already hard at work on the October 2014 show.  In the past few years, this show has been held at Cocoa Beach, Melbourne Beach, and Paradise Beach Park, but in each case funding for overtime and security has been an issue.  The organizers recently proposed to move the two-day show to the Melbourne International Airport for 2014.

Although the airport seems like the perfect place to hold an air show, there were some definite logistical and contractual issues.  These include working with the airlines, specifically Delta Airlines and US Airways regarding passenger traffic.  When the US Air Force Thunderbirds are in the sky, all commercial traffic must be stopped. Other concerns include traffic management, since historically tens of thousands of people flock to the show, security, insurance and funding.

Airport management seems to be very receptive to the idea of hosting the show and has in fact provided initial approval. Approval was received once the show organizers agreed to a schedule that did not disrupt the commercial flight plans already in place.  The current plan is for the US Air Force Thunderbirds to start their show only after the last commercial flight of the day has taken off.  The remaining issues, such as security, insurance, traffic and funding are still being worked through.

Not only is there a new location for the 2014 show, there will also be a new name.  Northrup Grumman is sponsoring this year’s event, so the name of the event will officially be The Northrop Grumman Air & Space Show.

Headlining the air show is the fantastic US Air Force Thunderbirds.  The Thunderbirds were established in 1953 and are currently in their 61st season.  This is the 32nd year they have been using the F-16 Fighting Falcon in their show.  Due to budget cuts, most of the 2013 shows were cancelled, but they are back for a full 2014 show season.

If you’ve never seen the US Air Force Thunderbirds, they perform acrobatic maneuvers and aerial demonstrations that simply take your breath away.  They are so exciting to watch that air show enthusiasts will often travel quite far to watch a show and you will find some enthusiasts that will follow them throughout the entire show season.

In addition to the military show, there will also be civilian acts, demonstrations and other aviation-related booths and events.  Mark your calendars now!  You won’t want to miss this one.