The title of this article may be a bit misleading only in the sense that ideas are not patentable – only inventions are.  So just the other day, I was chatting with someone that was trying to tell me that he had his invention covered – he filed a “poor man’s patent.”  This is just another one in the long line of Old Wives’ Tales that I hear on a weekly basis from prospective clients. 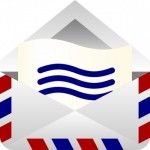 I believe that I am able to put my finger on the source of this nonexistent type of protection.  The theory behind the “poor man’s patent” is that you draft a document outlining your invention, seal it in an envelope and mail it to yourself.  If you kept the sealed envelope, then, based on the postmark, you can show a date on which the invention was in your possession, i.e., a date of conception.  That’s all good and well, but the United States moved from a “first to invent” system to a “first to file” system in 2013.

That is no longer the case since the new patent system is, essentially, a race to the patent office.  The inventor that files first is the inventor that gets the patent.  No more “swearing behind” references.  Therefore, just showing that you invented prior to another getting to the patent office does nothing for you.  Even under the old system, i.e., the “first to invent” system, a “poor man’s patent” standing alone, i.e, without a patent application, was worthless.  You cannot access the court system and ask a judge or a jury to enforce a right that the U.S. Government does not even recognize as a right.

There are many ways to get the patent protection ball rolling for inventors working on a fixed budget. One important thing to consider, however, is that the patent application process can be expensive, so you might consider conducting a patent search prior to jumping into the patent application process.  In future posts, I will discuss the importance of patent protection if one is to monetize their invention.  For more information, please feel free to contact me, or connect with me on Facebook, Twitter or LinkedIn.