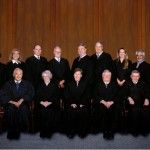 Nothing conjures memories of law school like writing a case brief (with the possible exception of an emergency root canal).  Nonetheless, the judicial bar fight that is the Federal Circuit en banc decision in CLS Bank v. Alice Corp inspires me to dust off my case briefing skills, starting with Judge Lourie’s plurality concurrence as joined by Judges Dyk, Prost, Reyna, and Wallach.  Why call it a bar fight?  Everyone punches, everyone gets punched, no one wins, and participants and observers alike talk about it for months afterward.

To you patent law students out there who are stuck with CLS Bank for an upcoming turn in the Socratic hot seat … “You’re welcome.”

– Upon appeal in 2012, Federal Circuit panel reversed as to method, system, and media claims

– What test should the court adopt to determine whether a computer-implemented invention is a patent-ineligible abstract idea?

– When, if ever, does the presence of a computer in a claim lend patent eligibility to an otherwise patent-ineligible idea?

– In assessing patent eligibility under §101 of a computer-implemented invention, should it matter whether the invention is claimed as a method, system, or storage medium?

– Should related method, system, and/or media claims at times be considered equivalent for §101 purposes?

– CLS Bank argued that method of escrow is “fundamental and ancient”

– No single opinion commands a majority

2.a) What is the fundamental concept at risk of preemption?

2.b) What is the practical likelihood of preemption?

2.b.i. Is the fundamental concept disembodied? (no inventive concept)

2.b.ii. Is the fundamental concept preempted? (subsume all applications)

– All issued patent claims receive a statutory presumption of validity (§ 282)

NOT seeking to eliminate preemption per se

Rather, ineligibility is based on wholesale preemption

– patent-eligible claim must include limitations that

— 1) add “significantly more” (Prometheus) to the basic principle (no disembodiment)

– As to Alice’s method claims

2.a) Fundamental concept? Abstract idea of reducing settlement risk (a form of escrow)

FAIL: As in Bilski, upholding Alice’s claims to methods of financial intermediation “would pre-empt use of this approach in all fields, and would effectively grant a monopoly over an abstract idea.”

– As to Alice’s computer-readable medium claims

– As to Alice’s system claims

2.a) Fundamental concept? “None of the recited hardware offers a meaningful limitation beyond generally linking ‘the use of the [method] to a particular technological environment,’ that is, implementation via computers. Bilski, 130 S. Ct. at 3230 (quoting Diehr, 450 U.S. at 191)”

Next time, more case briefs on the responses to Judge Lourie’s opinion.