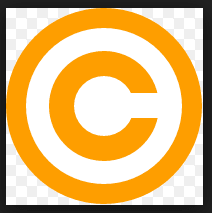 This article is copyrighted, meaning that if you use it in whole or part you are breaking the copyright law and you can get sued for plagiarism. If you are in college you may even get kicked out. However, just because you wrote something doesn’t mean you own it either. If you wrote it as a ghostwriter or have a contract that states that the rights of your article belong to the person you write it for (even if it will be published with your name in the byline), then the article is not yours to use again.

At its most basic, copyright is the law that allows writers, artists and photographers, among others, protection for the works they’ve created. It makes them yours and it makes it illegal for someone else to use them without your permission, unless you’ve clarified that they are creative commons. Creative commons allows the use by those that do not own the copyright without risk of plagiarism.

Musicians fall under the same rules when it comes to copyright. They have it a bit harder though. Not only are the lyrics to a song copyrighted, but so is the music itself. It’s likely you’ve heard a song, or ten, that sounded somewhat similar, or maybe they use a portion of another song for the hook. If the band or musician didn’t get permission from the owner of the song they “borrowed”, they have actually stolen it.

A recent case that reflects this issue is that of “Blurred Lines” by Robin Thicke and Pharrell Williams. The family of Marvin Gaye believed the song was a direct rip-off of his song ‘Got To Give It Up.’ The judge and jury agreed and the two were set to pay $4 million dollars to the family for their thievery.

This happens all the time in the music industry, and probably even in less publicized industries too, like the written word. The ones you hear about on the news are big cases like this, and it isn’t the first time a musician or band lost a case over music they did not rightfully take. It also won’t be the last time.

This does offer a good lesson though. You always want to be careful what you use yourself. It’s easy to take a moment and reach out to someone to ask if a work is public domain, meaning that the copyright has expired. This happens with a lot of classic novels and artwork. Or even to ask them if you can get their permission to use it if it isn’t public domain.

You don’t need a copyright notice for your work to officially be copyrighted and it doesn’t even need to be in print. Which is why it may be hard to know if something is copyrighted. The best way to go about things is to assume it is until you are told different.