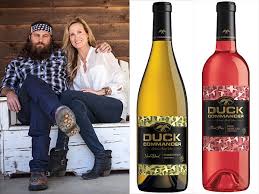 Is Duckhorn too closely similar to Duck Commander? Based on the labels of the two wine brands one would argue no. The two labels could not be more different. Where Duckhorn’s label features a prominent duck sketched in black ink on aged yellow paper creating a more traditional simplistic design, Duck Commander opts for bold with the backdrop offered in wild pink, green and brown safari motif with bold modern lettering.

But the labels are not what is bothering Duckhorn. Duckhorn is upset with the fact that Trinchero Family Estates used the word “duck” in their branding name and advertise the wine is made in St. Helena, the same hometown that their wines are made. To further cause confusion, wines are listed alphabetically on store shelves allowing for their wines to be placed next to each.

A statement released from the company states, “The case for confusion or dilution is compelling and concerning, given that many key U.S. retailers shelve wines alphabetically, meaning that Decoy by Duckhorn, Duck Commander and Duckhorn Vineyards wines could be placed side by side.” Duckhorn is concerned that their wine which is offered at a higher price point to Duck Commander’s $9.99 retail value will dilute their brand image.

Based on the similar name, same hometown location and the fact the products will be potential mixed together in wine stores, gives Duckhorn a compiling case to prove consumer confusion against Duck Commander. The suit was filed on November 27th and is still a waiting a court date.