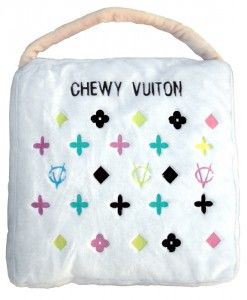 The fashion phenomenon Louis Vuitton filed a lawsuit in 2007 for trademark dilution and copyright infringement. The case was formally known as Louis Vuitton Malletier v. Haute Diggity Dog. The suit was against the pet product company called Haute Diggity Dog. It was based in Nevada and created a product line called Chewy Vuitton. They were chew toys for dogs.

Haute Diggity Dog argued that the line was a parody. They reportedly had other parody products for international brands such as Chewnel No. 5 (Chanel No. 5), Jimmy Chew (Jimmy Choo), and Dog Perignonn (Dom Perignon).The famous “LV” that is displayed on Louis Vuitton products was represented by a “CV” on the pet products.  The colors and other logos that Louis Vuitton uses were replicated with imitations of Haute Diggity Dog’s chew toys. The powers that be at the luxury luggage brand were not amused by this imitation.

Let’s further examine trademark dilution. It is a facet of law where a famous trademark owner can prohibit anyone from using their intellectual property in a manner that diminishes its unique quality. When trademark dilution typically happens, it occurs with non-permissible use of someone’s trademarks on unconnected products, such as expensive handbags and doggy chew toys. The dilution argument is intended to support trademark infringement claims for famous trademarks. If a trademark is not famous, the trademark owner must prove that the alleged infringement will create confusion between the two products. Now, confusion is typically not likely if the not-so-famous product is not even in the same market as the famous one. However, there is the possibility that consumers will think there is a connection between the two. Your Average Joe won’t know about alleged infringements or disputes over intellectual property. He will simply see a product that looks like a famous one that he is familiar with.

The outcome of the case surprised many. The United States Court of Appeals for the Fourth Circuit determined Haute Diggity Dog’s products to in fact be a parody. The Court stated that the pet product company did not infringe on the copyrights or trademarks of Louis Vuitton. They deemed the parody line as an amusement that was meant to entertain its customers. The Court also rejected the argument that the Chewy Vuitton products would cause confusion for customers of Louis Vuitton.

It seems likely that familiarity does breed contempt.