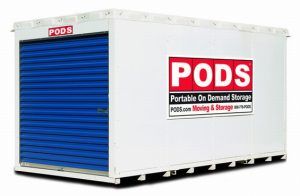 Most people today have heard of PODS by now. If you haven’t, they are a moving company that specializes in offering large containers you can pack your belongings up into that they call pods. The containers are then picked up by a truck and delivered to their final destination to be unpacked by the person that owns all the stuff inside. PODS built its whole company around this idea of movable containers, and the company branded those containers as pods the entire time. PODS recently got into a legal battle with U-Haul, another highly well-known company, over U-Haul’s use of the term “pods” for its new product, the U-Box.

After seeing the success PODS was having with its storage pod moving system, U-Haul decided to join in on the fun and put out a similar product that it dubbed the U-Box. This product is essentially the same thing. A small metal container that the customer can fill up with his belongings and have moved to a new location. The issue isn’t that U-Haul copied the idea behind the PODS shipping company, it’s that U-Haul made use of the company’s terminology while doing so.

Throughout the U-Haul website, PODS was able to locate the term pods or pod more than 600,000 different times. This is after U-Haul claimed that it wasn’t making use of the term very often, and that its product is known as the U-Box.

The case went to court, and ultimately, PODS won it. It was very clear to the judge that U-Haul was making use of the branded phrase that PODS built its company on. In 2014, the judge decided to award PODS with a total of $60.7 million, $15.7 million of which was for lost profits to PODS thanks to U-Haul.

The majority of the money awarded to PODS in this case was for corrective advertising. In other words, it was an amount determined to be enough to fix the misrepresentation in the mind of customers around the country. It’s highly uncommon for companies to be demanded to pay corrective advertising fees, and typically there’s just an injunction put in place to get the company to stop using the term, the photograph or whatever it is using to infringe on another company or individual. That’s why this particular case is a big deal, and it could be used as an example in the future to help other companies win large corrective advertising awards as well.