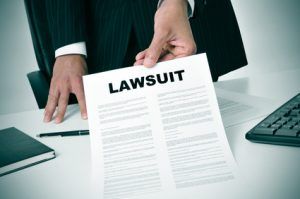 Lawsuits are everywhere. It’s a way of life these days. You get a splinter on a banister and you are suing the homeowner for pain and suffering. There is most certainly a time and a place for a lawsuit.  Some situations just scream for it. Injustices have been around for ages. Thinking back to some fictional characters and the injuries they endured, I often wonder how their personal injury cases would have been presented in court. Who would have prevailed?

Let’s start with the story of Little Red Riding Hood. The facts are, Little Red Riding Hood entered her grandmother’s home to deliver a basket of food. Upon entering the residence, she noticed the figure in her bed did not resemble her beloved grandmother. After a few moments of questioning, the truth came out; the intruder had murdered and eaten the grandmother. Imagine the horror Little Red Riding Hood felt; the suffering must have been unbearable. It was found the wolf acted alone in the crime and was imprisoned for life. And I would imagine in today’s court system, Red Riding Hood would have won a sizable sum towards her pain and suffering from the proceeds of the stories the wolf sold recounting his dastardly deed.

What about Humpty Dumpty and is untimely death? Humpty is sitting on a wall, just sitting there. The next instant he is in pieces on the ground. Was there a loose brick? Did the mortar in the wall crumble from inferior building materials? And all the king’s horses and all the king’s men tried to put him back together again but failed. Did they have medical training? Did their efforts hurt Humpty even more?  And why were horses trying to do anything? Humpty’s estate could sue the wall builder, the owner of the property the wall was on, the king’s men for medical malpractice and the king. Not too shabby of a settlement.

And then there’s the little old lady who swallowed the fly. We don’t know why she swallowed the fly.  But for odd reasons, many other creatures followed the fly into the woman’s mouth to find themselves swallowed by her. She ultimately died. I imagine her heirs may have discovered her doctor missed a diagnosis of lock jaw which prevented her from closing her mouth. As she was visiting her cousin on the farm, the whole bizarre swallowing incident began. The cousin neglected to secure his livestock and pets, allowing them to be swallowed by the old lady with the lockjaw. The old lady’s son sued the doctor who missed the diagnosis of lock jaw, the cousin who didn’t secure his animals and the neighbor who did cover his trash that attracted the fly and started the whole chain of events.

Yes, I’m having a bit of fun here, but the point is there are many factors to look at when filing a personal injury claim. Sometimes there is more than one person responsible. Make sure you have all your facts.